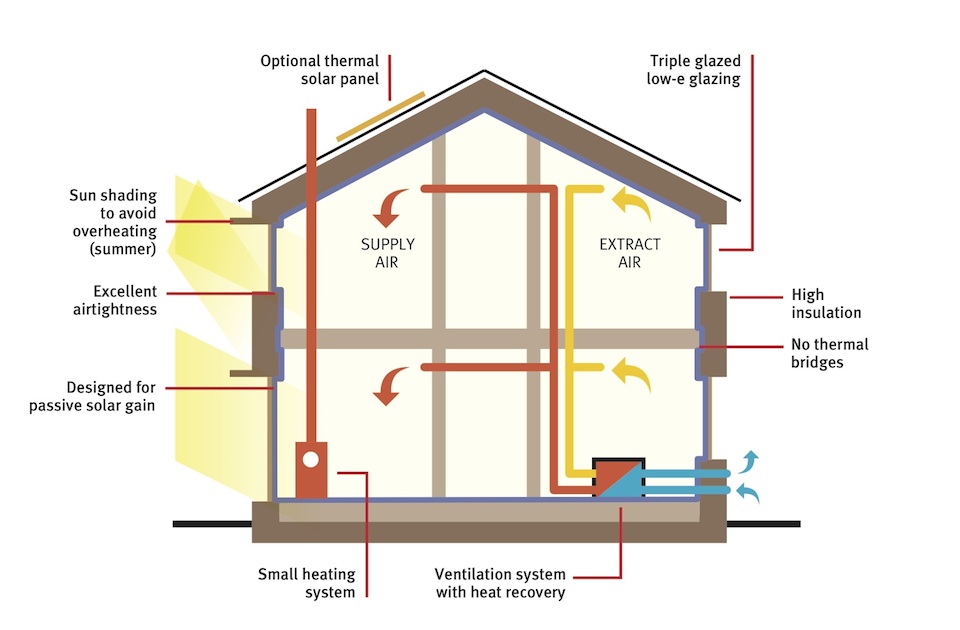 Over 300 delegates, including Director Chris Morgan, converged on the Business Design Centre in Islington, London for the one-day UK Passivhaus Conference which this year took as its theme the delivery of larger scale Passivhaus projects. Chris presented research on overheating at one of the afternoon seminars.

Jessica Grove-Smith of the PHI (Passivhaus Institute) kicked us off with a whirlwind tour of the large scale projects now complete or under construction around the world. Taken as a whole it is a compelling mix and whatever the difficulties encountered there is no doubt that Passivhaus projects now exist at more or less every scale and with every project type imaginable. Jessica showed us completed high rise towers in Vienna, New York and Bilbao (the tallest at 28 storeys) and large city blocks in Vienna again and Frankfurt which tended to be mixed use and office developments.

There are Passivhaus supermarkets and a large hospital in Germany while one of the most interesting aspects is the recent flurry of activity in China where we were shown four large projects across a variety of climatic zones and usage types. Returning to Germany, we were shown whole Passivhaus districts under construction in Heidelburg Bahnstadt to complement the existing district developments in Malmo and Freiburg.

Jessica discussed the breadth of Passivhaus classes which now include ‘Classic’ (the original version), ‘Plus’ and ‘Premium’ both of which incorporate renewables in ackowledgement of the significance of the potential contribution of renewables. The original 1991 Kranichstein homes by Wolfgang Feist have been recently upgraded to ‘Plus’ class via the introduction of photovoltaic panels on the roof. I got the impression that take-up of the new classes has not been as quick as the PHI would have liked but there are examples of each predictably in Germany.

Retrofit examples, called ‘Enerphit’ projects, have been around for a while but Jessica was at pains to explain that much of the focus just now is in supporting the ‘step-by-step’ approach. This recognises that not all retrofit works can be afforded in one go, and ensures instead that a stepped approach is mapped out carefully and each upgrade is undertaken using the best possible components and techniques, to avoid what she called the “lock-in’ effect of low level improvements over time.

Ralf Bermich leads the team developing the Passivhaus-only district of Heidelberg known as ‘Bahnstadt’. Heidelberg has set itself the target of only 5% carbon emissions compared to 1990 which is quite something and puts UK targets into perspective. An old freight and switching yard in the centre of town, this 116 hectare site will be developed into a mixed-use district with housing already complete and non-domestic projects and more housing underway, ultimately to be home to 5500 inhabitants and 7000 jobs, the development is due to complete in 2022 but is two years ahead of schedule. Reassuringly the remit of the new development extends beyond Passivhaus energy efficiency levels to a strategy of 100% renewable fuelled (woodchip) district heating, minimisation of domestic electrical consumption, waste and water management, biodiversity, an impressive marketing effort and fascinating procurement strategy.

Jon Bootland outlined the work of the Passivhaus Trust in the UK in the last year and highlighted what he felt were the current concerns and pre-occupations as Passivhaus projects begin to be upscaled: airtightness, MVHR, overheating, cost/delivery and (lack of) policy drivers.

John Lefever of Hastoe Housing Association continued the theme, describing how Passivhaus projects were now commonplace for his organisation. Having completed 120 Passivhaus projects as an affordable housing provider they had now got to the stage of offering Passivhaus certified homes for sale on the open market. They had requested two formal variations for homes to the Ph standard, or to Building Regs and the difference was now tested. In addition, interest in the Passivhaus options was higher than normal, with corresponding 91% customer satisfaction in the completed units so they could even add their own mark-up to the sale price.

Three more examples of large scale Passivhaus developments were on offer after the break including a large housing development in Norwich in which a ‘suitability’ rating had been applied to the scheme whereby 112 of the 172 units were deemed suitable, using orientation and form factor as broad indicators. This was followed by Rupert Daly of Collective describing the magnificent effort underway at the Cedar Multis in Glasgow. He noted that the form factor of these blocks had made the whole thing possible but the key was getting the service delivery right – a constant tension between cost and quality.

This was followed by a brief description of the Elephant Park development in London by Lend Lease. Arguably the most interesting presentation because it was relentlessly commerical, marking a real departure from the usual. Tom Kirkham and Matt Warren described how the marketability of these high-end townhouses drove all before it, resulting in some non-optimal design solutions and awkward details but they were refreshingly honest about the troubles they’d faced which resonated with the experience of many in the room.

Interestingly, they described how Lend Lease were interested in Passivhaus because they felt that current regulations had now reached a level where many of the ‘green’ or ‘quality’ brands were now insufficiently differentiated from the rest. Lend lease embraced Passivhaus therefore as something sufficiently robust and identifiable that it would be marketable, and give them an edge over competitors. The 26 acre city centre site will be complete by 2024 and include 2600 units. The Passivhaus units were CLT (cross-laminated timber) constructed and brick or stone-clad with basements, large roof terraces and high-end specification in areas like home automation so Passivhaus was only part of the marketing strategy. Build costs generally were reported as being around 2-3 % higher but with a 2-5% additional market cost.

Thereafter the conference broke into a number of parrallel sessions comprising presentations and masterclasses in issues such as buildability, MVHR, cost optimisation and overheating. The day ended with a panel discussion and the recurrent notion of reducing the standard to make it easier for more people to engage with what remains for many a step too far. Understandably the panel members tended to be against this, but the most compelling reason was given by Emma and John who noted that, as they could now build Passivhaus at more or less the same cost, they had the Designers and Builders with experience and the marketability sorted, there was really no point in going back to low quality, low performance buildings…